Welcome to our blog.

This space is devoted to sharing information about Point Reyes and the surrounding areas. Find information about the local plants, wildlife, the hiking/biking trails around Point Reyes National Seashore, tales of our recent outings and explorations, wildlife encounters & sightings, and other exciting happenings in the natural world.

﻿﻿ Watching jellyfish float and swim in an aquarium is often a relaxing experience, but finding them washed up on a beach or swimming next to you can be anything but soothing. We have several types of jellies in northern California waters, and sometimes swarms of them will be washed up onto beaches. Recently, Sea Nettle jellies (Chrysaora fuscescens) have been washing up onto the beaches of Tomales Bay, which is unusual for this time of year.
﻿﻿﻿﻿
﻿﻿﻿﻿

Though much is known about jellies in captivity, scientists are still studying how jellyfish populations behave in the wild and why we have been seeing larger numbers of them in recent years in the water and washed up on the beach. Jellyfish can swim, but spend most of their time drifting with the currents. As they get closer to shore, large swells or high tides will wash them up onto the beaches, where they die.
Sea Nettles are one of the types of jellyfish that we see in Tomales Bay. They usually live in the open ocean along the coasts of California and Oregon during spring and summer, then move into shallower bays for the fall and winter. The bell, or top part of the Sea Nettle, grows over 17 inches across. The four oral arms, the furry-looking tentacles underneath, can be up to 15 feet long. They have 24 thin brown tentacles hanging from the bell that capture and paralyze their food. They eat young fish, zooplankton, and other jellies. Marine animals such as birds and turtles eat Sea Nettles and are not hurt by their sting. Small crabs will sometimes hitch a ride on Sea Nettles as they move through the ocean. Sea Nettles only live 6 to 12 months in the wild. 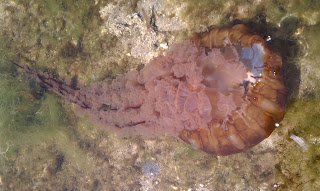 Jellyfish have stinging cells called nematocysts. Thousands of these cells line each tentacle, and they react to pressure. The stinging cells shoot out a barb attached to a thread, much like a harpoon, which hooks into prey to keep it from swimming off. Because the sting is an automatic reaction, the cells can still fire even after the jelly has died or the tentacle has been broken off. Sea Nettle stings in people rarely require medical attention, but they can be quite painful, so don’t touch! If you are stung, rinse the area with saltwater first to try and remove all parts of the tentacle. A vinegar rinse can sometimes reduce the pain of the sting, but do not use fresh water or urine, as these can make the sting worse. If you have any doubts about the severity of the sting, seek medical attention. 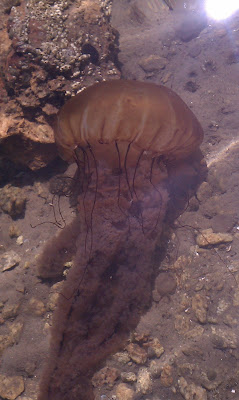 Sea Nettles are beautiful jellies in the water or washed up on the beach, as long as you do not touch the stinging cells. Want to know more? Check out our sources: http://jellieszone.com/, http://montereybayaquarium.com/animals, and http://zoo.pgh.pa.us/.
Posted by Point Reyes Outdoors at 12:15 PM

Slideshow from our Tours

Click on the photo above to start the slideshow.

Point Reyes Outdoors
We are a kayaking, hiking and biking outfitter providing naturalist led tours in the National Seashore. We explore local waterways observing pristine wildlife habitat. Join us and enjoy family adventures, paddle on Tomales Bay or Drakes Estero, wildflower & marine mammal hikes, kayak lessons, kayak camping with family or friends, bike tours and rentals. It is our goal to provide the finest wilderness experiences with the least impact possible. We started in 2005 to provide something different, we strive to provide extraordinary kayaking experiences on Tomales Bay and Drakes Estero. In addition to our paddling tours, we provide hiking tours, team building (on land and water), environmental education, and mountain bike rentals. 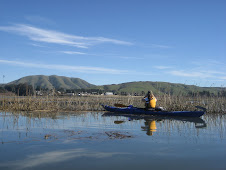